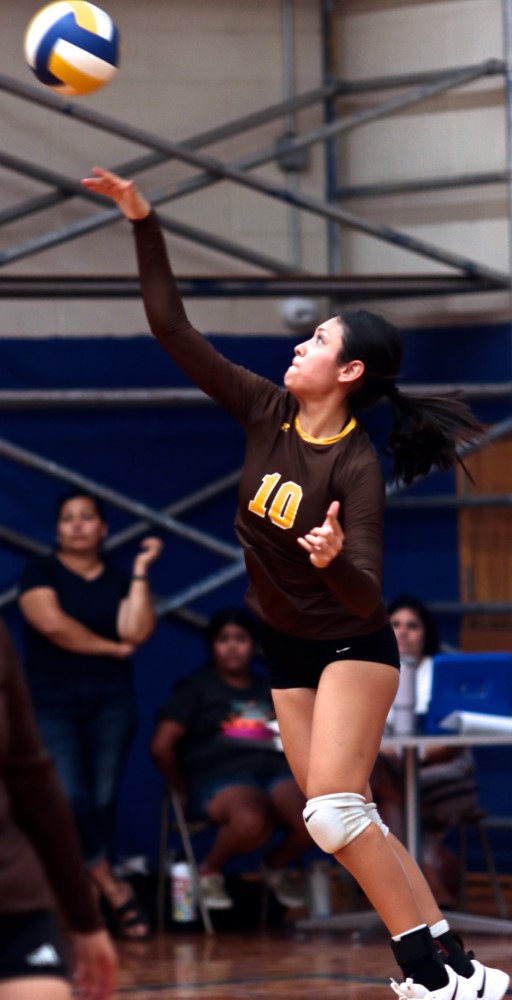 Suiting just six players in Durham, Mia Rivera led the way with five kills and six blocks, while Giselle Vega dished out 13 assists in the loss.

After a slow start against the visiting Lions, the ‘Jackets got back on track by employing their strength at the service line and then dominating at the net.

Rivera turned in another strong performance, hammering home a game-high 15 kills, while in her first appearance this season, Trinity Tungasmita recorded a double-double handing out 14 assists and making 12 digs.

Brianna Jaime had her best production on the attack so far this year with seven kills, while Vega pitched in with seven more assists.

In the back row, Linda Rivera and Alexa Barrera sparked the defensive effort, finishing with 16 and eight digs, respectively.

This week, Williams (4-3) faced some stiff competition having traveled to Willows on Monday and to East Nicolaus on Wednesday before welcoming the Winters Warriors to town tonight. ■

A demanding preseason schedule continued for the Pierce Bears (2-7) as they were swept by Sutter and Woodland, two Sac-San Joaquin Section teams, in matches against last week.

Back in the confines of Natalie Corona Gymnasium against the Wolves, Pierce dropped its second straight match, this time by scores of 17-25, 17-25, 12-25.

Maggie Reyna ended the evening with a team high five kills, while Jamie Figueroa made 12 digs.

Pierce (2-7) hosted Wheatland on Monday night before hitting the road to meet River Valley in Yuba City on Tuesday. ■

Last week was a busy one for the RedHawks, who to this point have spent the entire season away from home, as they await the installation of bleachers in their newly refurbished Don Bransford Gymnasium.

Yet, they have not missed a beat, having picked up three more road wins, and going 4-1 at Sutter’s Battle in the Buttes Tournament.

In Corning last Tuesday, the RedHawks took care of business by sweeping the Cardinals 25-21, 25-21, 25-23, although no statistics from the match were provided.

The following evening saw the RedHawks again head east, this time to Marysville, and repeating their success as they defeated the Indians 20-25, 25-13, 25-15, 25-16.
For the second night in a row, Gwinnup led the charge, recording a double-double with 12 kills and 14 assists.

Also making significant contributions was Elle Faris with seven kills and six aces, Jasmine Bernardo with seven kills, and Brooklyn Bradbury who added 14 assists to the cause.
Colusa finished the week last Saturday at Sutter’s home tournament, breezing through pool play with wins over Marysville, Las Plumas, and Red Bluff, and then defeated Orland in the first round of the gold bracket, before ultimately falling to Sutter in the semifinal match.
With just one loss against their nine wins, the RedHawks made the long trek to Yreka on Tuesday, head back to Sutter to face the Huskies tonight, and will play in the Dixon Classic Tournament beginning on Saturday. ■

Jennifer Corriea
This article was updated or modified on: August 31, 2022
80

This page is sponsored by: