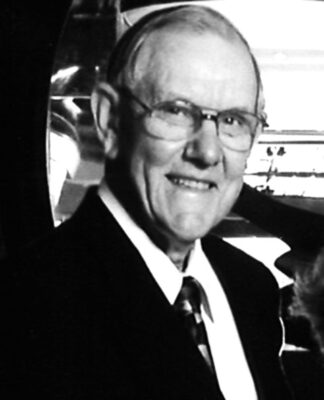 We said goodbye to our much-loved patriarch Wayne Alton Hine on May 22, 2022. Despite our sadness, we have so much to celebrate about this wonderful man and a life well lived. Wayne’s healthy and athletic lifestyle served him well beyond his 95th birthday.
Born February 11,1927 in Sacramento he was immediately taken home to the family farm in Colusa County, California.

Raised along the Sacramento River where giant white oaks tower above the quiet fertile countryside, he grew up with a boyhood most would envy, exploring the wilds of nature in the companionship of his older brother, Donald, and many close friends.

He was a third generation Californian. His Grandparents were Samuel Henry Hine and Susan K. Hine of Grimes and on his mother’s side he was a descendant of the Ballard/Fairlee family of Sutter County. His parents, Verd Ballard Hine was a beloved educator and Samuel Henry Hine Jr. was a farmer and former service member. Their collective love, talents and industry all contributed to a wonderful, full, and active childhood for Wayne.

Growing up Wayne developed a respect for the conservation of both soil and water. Farm life was not easy; cows to milk, hogs to chase down and sheep to care for. Cold mornings with long bus rides to school. He shared work and play with his brother Donald, who was being groomed to take over the ranch. Wayne had other dreams and aspirations.

He participated in many sports and was a standout athlete. He played football, basketball, baseball and tennis. He enjoyed a game of golf with his friends, Fred, and Art where he was a member of the Arbuckle Golf Club. He enjoyed water and cross-country skiing at his cabin near Serene Lake. Many a summer he and his close friends would take their boat off the coast of Oregon to fish for cold water salmon and albacore. He loved diving off Northern California coast for abalone.

Annually he would go hunting with his buddies from the small town of Grimes. They would head to Montana and Wyoming embracing the challenge of the bitter cold, the adventure of it was a pleasure he really enjoyed. Camping & hunting with his father and brother were warm memories.

Wayne was an excellent student and a lifelong learner. Upon graduating from Pierce High school in Arbuckle, Wayne received a full scholarship to Redlands University where he planned to pursue a degree in Naval Architecture.

Life has a way of interfering with the best laid plans, and Wayne’s life took a tragic turn of events when his brother Donald was killed in a fiery explosion at the ranch. The family was devastated. Wayne felt it was necessary to leave University for a year and assist his parents in running the ranch.
He and his best friend, Wayne Tweedy, took a year from university to help the family settle in from Don’s loss. Shortly thereafter, his father, Samuel Hine had a stroke, and this ended any thoughts Wayne had of returning to university. At a very young age, he assumed the management of White Oak Farms. It was a struggling enterprise, short on resources and manpower, survival of the farm was questionable for several years.

He decided that livestock was not the way he wanted to go selling off the hogs and cattle, keeping the sheep. He cleared 45 acres of old oaks and planted a walnut Orchard. He grew rice, tomatoes, and sugar beets, contracting with Holly Sugar Company. He contracted to grow for Blue Diamond Almond growers and joined the Meridian walnut growers, where he served as Vice president. He was a member of the Woodland Rice Growers association. He gained large seed contracts and inherited an almond orchard in the Sutter Buttes from the Ballard side of the family. Later he purchased more almond land in the Sutter Buttes.

Wayne was a fast learner and experimented continuously resulting ultimately in the success of the ranch. Without resentment, the running of the farm became his life’s work.
Having achieved a level of success, he married late in life, to a widow, Nancy Foosaner Long. They were married 35 years. With that marriage came three stepchildren. Stephen, Suzanne and Sally Long. Quickly, all three agreed that Wayne was a fine addition to the family, and they all grew to love and appreciate him.

He and Nancy traveled the world extensively. Early in their marriage they took daughter Sally to Hong Kong and the Island of Macau and then on to several cities in China. They walked part of the great Wall of China fulfilling Sally’s wish to walk the wall, on her 21st birthday. They spent weeks in Australia and visited with one of Nancy’s art patrons where they viewed one of her paintings which hung in a Lodge in Tasmania. The continued to New Zealand where they were amazed by palm trees growing by Glaciers.

Wayne took pleasure in reading. He was a history buff and a student of the Civil War. They visited many of the civil war battlefields in Pennsylvania and Virginia. He enjoyed books on Naval Architecture, Agricultural Law, Aeronautics, and the history of the old west. He found pleasure in visiting museums and historical sites around the U.S. and in the many countries that he and Nancy visited.

Over the years, they cruised with six dear friends, the Geiser’s, Forgrieves and Starks. Cruising from Florida to Mexico through the Panama Canal. Their most memorable cruise was also their longest cruising the Baltic, visiting Poland, Norway, Russia, and Lithuania. Frequently they would sail with daughter Suzanne & John, along the Southern California coast and from Long beach to Catalina Island. He was honored to be invited on a Press Boat for the America’s Cup in San Diego. They eventually joined the Newport Beach Yacht Club.

They ventured by land with Suzanne and John through Ireland and Scotland. Wayne and Nancy each took a turn kissing the Blarney Stone. They visited in London, traveled to the White Cliffs of Dover.

They traveled by train, crisscrossing the U.S. several times, also taking the Trans Canadian railroad from Toronto to Vancouver, British Columbia. They also took a train in Alaska to visit Denali National Park.

National Parks were no stranger to Wayne or Nancy. They stayed in Yosemite, the Grand Canyon, Zion, Grand Tetons, Glacier, and Yellowstone.

While visiting with son Steve at his home in Chicago they planned to fulfill his birthday wish of camping at Lassen National Park with the whole family. Wayne’s tent was jokingly referred to as the Lassen Hilton. It was a great trip that everyone enjoyed.

They took several trips to Alaska, cruising the glaciers and taking side excursions to explore the cultural heritage and beauty of this rugged region. Whale and wildlife viewing was always a pleasure to Wayne.

Wayne loved his family and found much joy in being a grandfather to Clinton, Coleman, Clayton, and Sarah. He also loved his many dogs, and his heart broke every time he outlived one of them. On the farm is a special area just for the family pets, much loved and enjoyed.

The State of California recognized Wayne and White Oaks Farms as a 100-Year-old Heritage Farm with a special lunch and award ceremony at Cal Expo. Wayne attended Westminster Presbyterian Church in Sacramento for 35 years where Nancy had been a lifelong congregant. He was an active member of the Stowaway’s organization.

Wayne lived an idyllic life, reminiscent of historical times. He contributed to the feeding of the world, the betterment of the lands he stewarded and the circles of people that he shared a wonderful life with, family, friends, his community, farm, church, and friends made along the way.

To know Wayne was to know integrity. His word was his bond. He was truthful, honorable, considerate, kind, and fair minded. All his friends and family, and those who worked with and for him, held him in deep regard and with respect.

keeping with his spirit please consider making a donation in Wayne’s Memory to inspire the next generation of California Farmers & Ranchers to the Colusa 4H Club.