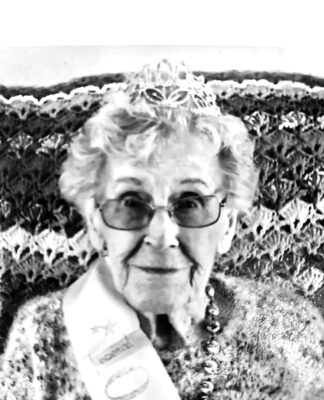 Evelyn Carpenter lived to be 100 years old, almost 101, still walking around, wearing jewelry and enjoying her grandchildren. She peacefully passed away Jan. 23, 2022. What a character.

She was born to Alice and Edward Harris on Feb. 6, 1921, grew up in Ladoga and Stonyford. She attended Maxwell High School, but never graduated.

In 1938, she married John Lawrence Shearin and soon had four children. She worked at the Maxwell Post Office and became Postmaster in 1964.

After John passed away, Evelyn started her travels around the world by visiting her daughter, Nancy, in Bogata, Colombia. Often her travel companion was her sister Carmen.

In 1975, she married Robert Carpenter. After he passed away, she moved to Chico, CA in 1996. She spent the remainder of her life in Chico.

She wasn’t the kind of grandma who baked cookies, she was too busy being her own woman.

She is survived by her son Delton Shearin and her daughter Nadine Crenshaw, 10 grandchildren, and many great and great-great-grandchildren.

She is laid to rest in the Maxwell Cemetery in between her two husbands.

Cheers to you grandma. You are missed. ■