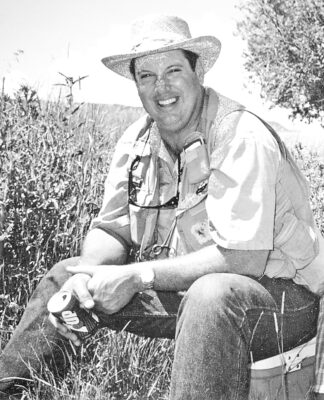 Daniel Curtis Yerxa passed away unexpectedly on January 6, 2022. He was born on October 3, 1952 at Rideout Hospital and lived most of his life in Colusa. He was the beloved son of Max N. Yerxa Jr. and Catherine Kinch Yerxa.  Dan attended Our Lady of Lourdes elementary school and graduated from Colusa High School. His college years were spent at Menlo Business College where he was graduated with a degree in Business Administration.

During his time at Menlo he was a member of the basketball and an accidental member of the field hockey teams.  He was a “temporary” goalie for one game and found out he was a natural. The team kept him on for a year. He was president of his class at Menlo.  Dan was also a prominent member of the social fraternity the I Eta Pies.

He returned to Colusa to farm with his father, Max.

He farmed prunes, walnuts, pistachios, and rice with his father and specialties crops like garlic on his own. He also did custom harvesting of pistachios and olives in the Fresno area. In later years he managed several walnut hullers in the county.  His vast accumulation of knowledge and creative solutions to huller problems earned him the nickname of “the legend”.

Dan was a member of Ag Leadership Class # 11. His class was slated to tour the middle-eastern countries of Saudi Arabia, Jordan and Israel. When the State Department could not obtain visas for the group to enter Saudi Arabia, his class benefited from one of Dan’s connections with the Saudi royal family who agreed to sponsor the class for entry into the country.

Dan is a 4th generation member of Sunsweet Growers. He was Chairman of the Sunsweet Dryer Board for several years. His great-grandfather brought the first prune trees into the county and established a nursery between Colusa and Princeton.

Dan threw himself into many community activities.  He was a life-long member of Our Lady of Lourdes Catholic Church. He taught catechism for years after school at Our Lady of Lourdes. On Holy Week he worked tirelessly to help set up the sanctuary for services.

Dan was a multi-year member of Sacramento River Fire Protection District.  And he was President of the Farm Bureau.

He provided transportation of perishable food from Chung Sun Market for the Colusa County Food Basket Program for many years bringing a trailer and forklift as needed.

Dan had an “open door policy” when it came to helping people in the community. No matter what the need Dan tried to fill it for the individual or organization. He served as Supervisor for District 5.

In the winter time Dan helped Max build bamboo fishing rods.  The world renowned Yerxa Bamboo Fly Rods were created in a shop on the ranch. In the summer there were trips to various spots in Downieville, Ca. and Ennis, Montana to fly fish for trout on world famous rivers like the Madison, Gallatin, Jefferson and Ruby. Dan donated annually to the local coffers because of speeding along rural Montana roads.

In his youth Dan was a member of the illustrious Boy Scout Troop 32 of Colusa. He achieved the rank of Eagle Scout.

Dan was a teller of great stories and a lover of animals.  Anyone who dropped by the ranch for a chat with Dan first had a close encounter with one of the family boxers.

Dan had many hidden talents, one included his baking skills which were showcased at Catherine’s Kitchen bakery in the Chung Sun Market. It was named for his mother who was a fabulous cook.

Dan is pre-deceased by his mother and father and his brother, Mark.

He is survived by his much beloved daughter Danielle Catherine Yerxa, his sister Margo and brother-in-law David Cheuvront and friends and cousins too numerous to count.  Dan was rich in friends and relationships.

If you want to remember Dan best, put a smile on your face every day and face the world with warmth, kindness and generosity.

Services will be planned for the spring. Dan would love if you would donate to your local charity.  ■