Williams’ soccer off to hot start 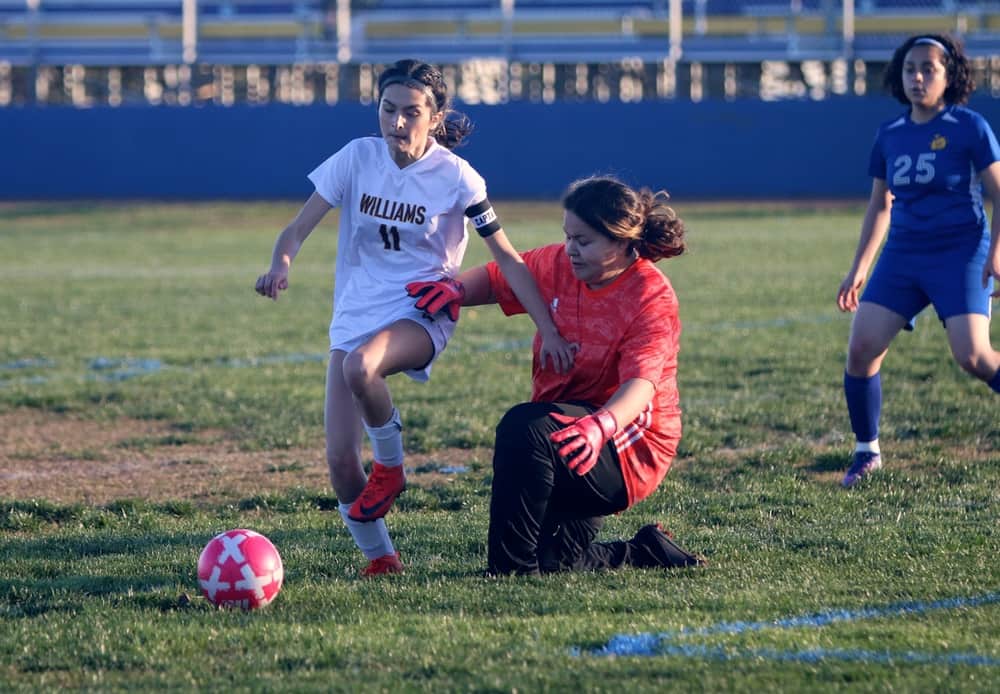 Williams’ Brisa Garcia gets past the Pierce goalkeeper to score one of her five goals in the ‘Jackets’ win over the Bears on Nov. 30.In the first two matches of the year both the Yellowjacket boys and girls soccer teams are off to 2-0 starts having dominated their Sacramento Valley League foes Pierce and Willows.

Under the direction of second year head coach Leonel Mendoza Acevedo, the ‘Jacket girls have outscored the opposition 15-1 and have a win streak of eight straight games dating back to last year.

Accounting for eight of the goals is junior striker Brisa Garcia who tallied five in an 8-1 win over Pierce on November 29, then came back with a hat trick in the 7-0 win over Willows on December 2.

Sophomore Ashanti Madrigal has also been productive scoring a brace in each game to give her a total of four on the season.

Three others have added to the goal totals for the ‘Jackets including senior Nohelia Hernandez, junior Evelyn Acevedo and sophomore Isabella Santillan.

On the boys pitch, coach Humberto Guzman, now in his eighth season at the helm, also has his squad playing well as they have downed Pierce 7-0 and followed up with an 8-2 win on the road in Willows.

Against the Bears last Tuesday, sophomore Kaled Correa and freshman Ernie Lemus each scored a brace, while seniors Michael Cervantes and Leo Gonzalez added one apiece, as did freshman Leo Hernandez.

Also finding the back of the net was Cervantes, Correa and sophomore Angel Munoz.

In goal over the two games sophomore Jesse Velazquez made 11 saves while senior Luis Araujo has tallied nine.

Both Williams’ squads hosted Colusa at McCarl Field on Monday, December 6 then traveled to Live Oak on Wednesday.

Jennifer Corriea
This article was updated or modified on: December 9, 2021
59