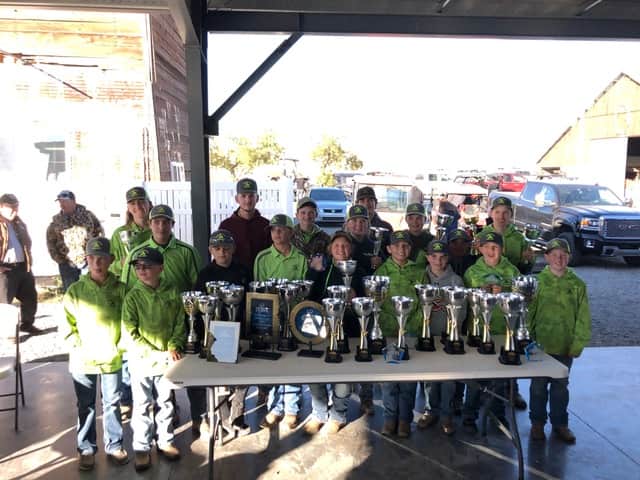 All the early practices paid off for the Ducks, who have been honing their skills in a discipline that is often described as “golf with a shotgun,” due to the fact that courses are laid out over natural terrain and include 10 to 15 different shooting stations.

Competing in five different divisions at the California State Youth Shooting Sports Association State Shoot in Dunnigan, the Ducks garnered 14 podium spots, both individual and team, when all was said and done.

In the Rookie category, which includes participants in the fifth grade and younger, the Duck’s Caleb Manhart claimed second place, then headed up the first place Rookie squad, where he was joined by teammates Cade Campbell and Riley Peterson.

Colusa also had the second place Rookie squad that was composed of Brady Washburn, Rachel Shadley, and Rhett Bowen.

Robert Shadley led a sweep for the Ducks in the Intermediate Entry competition for first-year entrants in grades six through eight, by finishing first, while Lucas Bowen and Jackson Soden took second and third, respectively, and the same trio was the top IE squad.

The Ducks also made a good showing in the Intermediate Advanced, which is for those sixth through eighth grade, with more than one year of participation, as Jayce Lee took the top spot on the podium, then combined with Landon Barrett and Reagan Parisio to form the second place squad in the category.

In the Senior Division, Parker Gill finished just off the medal stand in fourth place, but along with Dustin Wurm and Tanner Hansen formed the second place JV squad.

Rounding out the medalists for the Ducks was Devin Wurm, who was third in the Young Adult category, which is for those 18-22 years old.

For head coach Bruce Hardwick, it was a fitting end to the sporting clays season, as it showed the promise of what is to come for the Ducks.

“We were really pleased with the consistency of our younger shooters,” Hardwick said. “It should make us very competitive in the years to come.”

The Ducks will reconvene in January, when they open the trap and skeet seasons. ■

Jennifer Corriea
This article was updated or modified on: November 18, 2021
50

Maxwell Participates in National Night Out