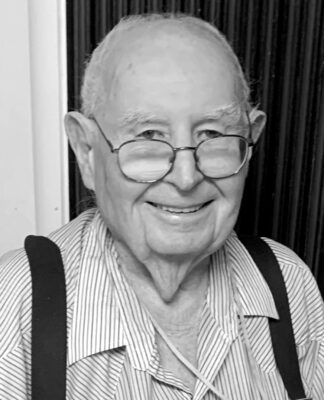 Clifford “Cliff” McVey was born on April 18, 1925. His parents were Lucille Reische McVey and Chester “Chet” McVey. Cliff attended grammar school and high school in Colusa and was drafted into the Air Corps in 1943 during his senior year in high school. He served in the Eighth Air Force in England. Cliff, or “Mac” as they called him, was the Ball Turret Gunner and second Radioman on the B-17 Flying Fortress, “Doc’s Baby”, flying 33 combat missions and 2 chow hound missions dropping food into Holland. The Dutch planted flowers on the ground that read “Thank You Boys” that could be seen from the air in appreciation for the food they dropped.

Cliff was awarded: The Air Medal with Four Oak Leaf Clusters for meritorious achievement in aerial combat; The European Ribbon with Four Battle Stars; The Victor in Europe Ribbon and The Good Conduct Medal. He was promoted to the rank of Staff Sergeant.

He was discharged from service in 1945 and went to work with his father, Chet McVey as a Signal Oil distributor. Later, he worked for Chevron Oil until his retirement.

Cliff married Aggie Gomes in 1948 and spent 55 years together before her death. Cliff enjoyed fishing and camping at Fort Bragg with his family and also refinishing many antique furniture pieces. His vegetable garden was abundant and he and Aggie canned many fruits, jams and vegetables. He was a wonderful cook using all his produce and fresh ingredients.