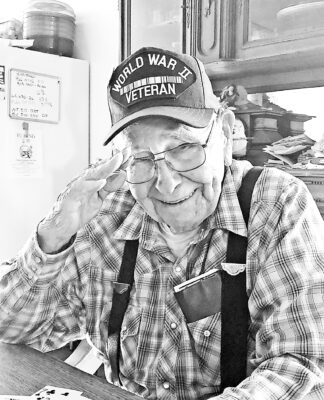 Prewar: Paul Niehues left Kansas at a young age of 17 and migrated to California, stopping off in Colorado and Nevada along the way to work various jobs. At the time of the bombing of Pearl Harbor, Paul was residing in Chico California. Hearing the call to arms, Paul enlisted in the Navy and was assigned to the USS Maryland, a Colorado class battleship. He sailed from San Francisco on June 7, 1942.

This was not his only accomplishment while on the Maryland, he also obtained his high school diploma, and a college degree, from Ball State University Teaching College via correspondence course and testing proctored by his superior officers.  “Reading and educating myself was my way of getting my mind off of the war. It kept me from going crazy like some of my shipmates.”

When  the war was over, Paul transferred to USS Uvalde, a cargo ship that delivered supplies to Australia and the Pacific Arena Military  posts. The only cargo was Budweiser and Shlitz Malt Liquor which was gladly accepted at each stop! Paul was discharged from the Navy on December 30, 1946.

Post war: Paul return to Kansas and then went to Muncie Indiana. Here he met Theresa  Westerman and they married. Upon moving to California they settled in Glenn County in the 1950’s. The young couple began to raise a family, having four children. While in California Paul held many jobs including a dairyman, a farmer, and a millwright. He retired from the Millwrights profession in the early 1980s. Paul loved hunting, fishing, traveling, talking with people, and serving his community. He was a founding member of the Willows Knights of Columbus, a member of the Willow‘s Pheasant Association, and a member of the Willows Elks Lodge.

Paul is survived by many family members including One sister, Anna, four children, Richard Niehues, Mary Ellis, Nancy Thuemler and Paulette Woolley and their spouses. He is also survived by 13 grandchildren, and 19 great grandchildren, numerous nieces and nephews and great nieces and great nephews spanning across the United States. He was loved by each and everyone of them and he loved them all in return.

Paul had a wonderful long life that was filled with adventure, family and love.